Decentralized Exchange (DEX) Uniswap has surpassed its host Ethereum blockchain in terms of fees paid over a 7-day rolling average. 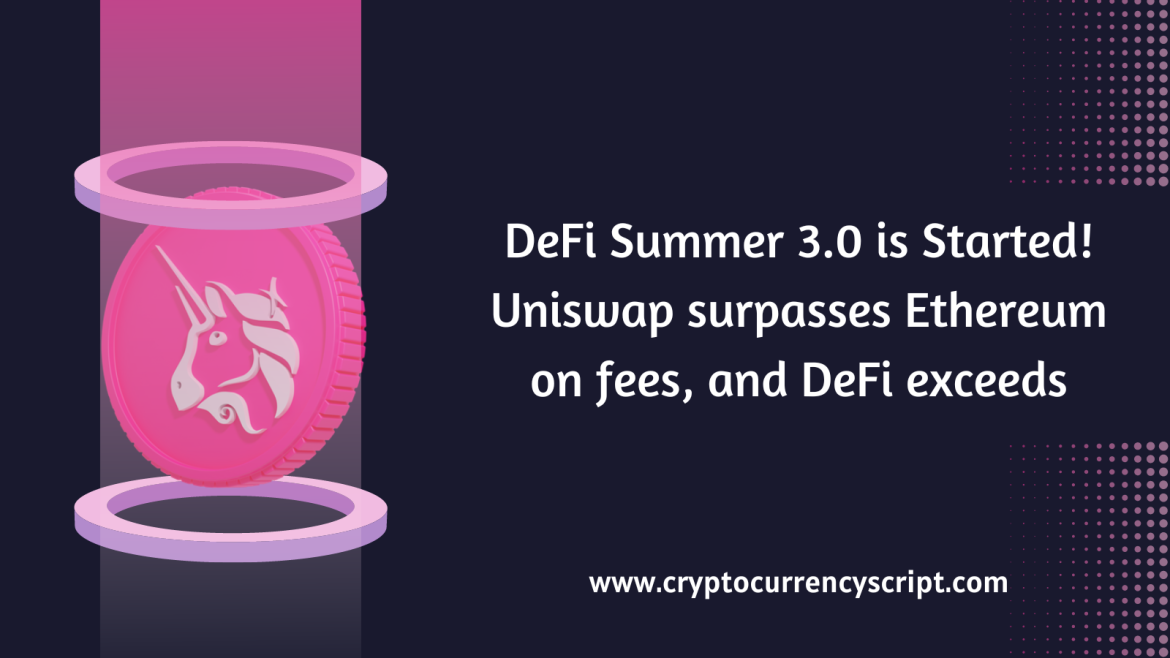 Decentralized Exchange (DEX) Uniswap has surpassed its host Ethereum blockchain in terms of fees paid over a 7-day rolling average. The surge seems part of a current spate of high demand for DeFi amid the current bear market. Decentralized Finance (DeFi) Platforms such as AAVE and Sythentix have seen surges in fees paid over the past 7 days. Whereas their native tokens and others such as Compound (COMP) have also growled in price.

According to the data from the Crypto fees, Uniswap traders accounted for an average daily total of $4.87 million value of fees between June 15 and June 21, surpassing the average fees from ethereum users which accounted for $4.58 million.

Uniswap’s most advanced v3 protocol (based on Ethereum Mainnet) accounted for the lion’s share of the total fees with $4.4 million. While the v2 variant also rendered a notable $336,556.

During this period, Ethereum’s total fees only exceeded Uniswap’s on two days out of the seven. In terms of a peak day of fees generated, Uniswap topped out at $8 million on June 15. This is beating out Ethereum on the same day at $7 million.

Uniswap allows peer-to-peer (P2P) swaps of Ethereum-based tokens without having a centralized authority to enable trades. This is attained by Automated Smart Contracts. Under Uniswap’s fee structure, fees are paid by traders to liquidity providers who acquire 100% of the fees on the Decentralized Exchange.

Assuming Ethereum is the blockchain home to the majority of DeFi and is known for its costly fee structure, a Decentralized Exchange such as Uniswap beating out the blockchain in fees over a week is impressive.

According to Data from CoinGecko, Uniswap has pumped 17.4% over the past 7 days to sit at $5.18 at the time of writing. Recent acquisitions of the NFT Marketplace aggregator Genie and the appointment of the former president of the New York Stock Exchange Stacey Cunnigham as an adviser at Uniswap Labs may have contributed to this.

Uniswap is not only the platform to see a surge in these fees and token prices of late. As data is also showing robust investor demand for several Decentralized Finance Platforms despite the recent bear market.

DeFi Lending Protocol AAVE and Sythentix Derivatives trading platform Synthetix in certain are ranked third and fifth in terms of average fees paid over the past seven days respectively.

Much like Uniswap, Aave saw a wave in prices on June 15, as it’s totally enhanced by 69%. Its native token Aave (AAVE) has also pumped 22% since then.

The thrive can also be seen by perceiving Synthetix (SNX), the price of which has profited 105% since Sunday to sit at $3.08 at the time of writing. A key basis after this appears to be the Synthetix Improvement Proposal 120 that went live last week that allows users to “automatically exchange assets without fee rehabilitation,” Therefore, increasing the speed of trading.

Twitching this trend, fees on lending platform Compound have been dropping since April, and yielded a mere seven-day rolling average of $11,753 over the past week, though its native token COMP has improved 16.7% within that time frame to sit at $40.50.

Interested to start your own DeFi platform like Uniswap, then Zodeak is the perfect solution for you. They offer you all Blockchain services especially Decentralized Finance DeFi Services such as Staking, Lending, Yield Farming, and much more.,

To get more information about their DeFi services, contact them via,

Amazon Marketing Companies: Where To Find The Best...

Things To Consider Before Booking A Hotel In...

What are the Benefits and Challenges of Tier...

How to Reprint Checks in QuickBooks Online and...

Here Are the Most Common Reasons for Engine...

Biofeedback in Zurich – What It Is and...